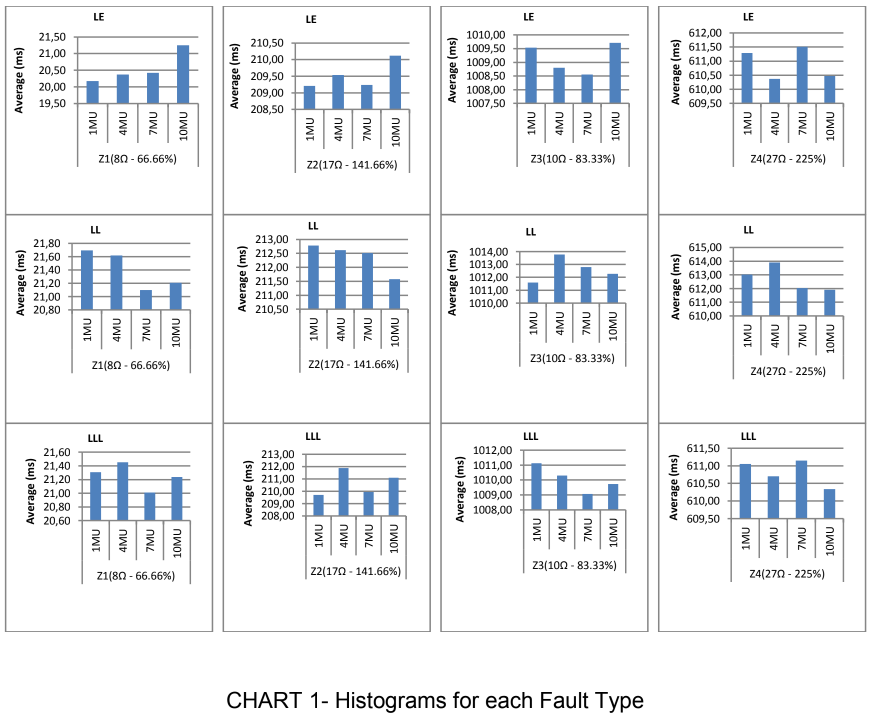 This paper reports real tests results that were obtained with a commercial IED that already works using the Process Bus, to verify the performance.

Firstly the IED was tested by using just one MU (Merging Unit) providing samples of Currents and Voltages to the IED through the LAN (Local Area Network). These samples were used by IED to measure the line impedance in order to decide about to trip or not. After exhaustive tests made with this arrangement the number of Merging Units connected to the LAN was increased, and the tests were repeated to investigate the effects of the loading to the system behavior (Up 10 MU ́s was connected together). The faults were carried on using a relay test set, and the trip time was measured for each case condition.

To evaluate the Process Bus behavior it were realized more than one thousand faults. The LAN was gradually loaded by increasing the number of MU connected to it. It will be evaluated if the trip time was affected with the increase in number of merging units.

This website uses cookies to improve your experience while you navigate through the website. Out of these cookies, the cookies that are categorized as necessary are stored on your browser as they are essential for the working of basic functionalities of the website. We also use third-party cookies that help us analyze and understand how you use this website. These cookies will be stored in your browser only with your consent. You also have the option to opt-out of these cookies. But opting out of some of these cookies may have an effect on your browsing experience.
Necessary Sempre ativado
Necessary cookies are absolutely essential for the website to function properly. This category only includes cookies that ensures basic functionalities and security features of the website. These cookies do not store any personal information.
Non-necessary
Any cookies that may not be particularly necessary for the website to function and is used specifically to collect user personal data via analytics, ads, other embedded contents are termed as non-necessary cookies. It is mandatory to procure user consent prior to running these cookies on your website.
SALVAR E ACEITAR
REGISTER
ACCESS MY ACCOUNT
REGISTRARSE
ACCEDER A MI CUENTA
CADASTRAR
ACESSAR MINHA CONTA